Leaking Pee After Giving Birth - What the Heck??

If you find yourself leaking pee after giving birth, take comfort in the fact that you are SO not alone. This issue is super common. However, just because it's common absolutely doesn't mean that it's normal.

After giving birth, our bodies are stretched every which way - and sometimes parts are even torn. Oftentimes this is an inevitable part of giving birth, and doesn't necessarily mean something "went wrong."

It's a common myth that women won't suffer from leaking if they have a C section. How I wish that were true! The fact is, the act of carrying a baby, combined with hormonal shifts in our bodies oftentimes are the primary culprit leading to the issue of leaking. 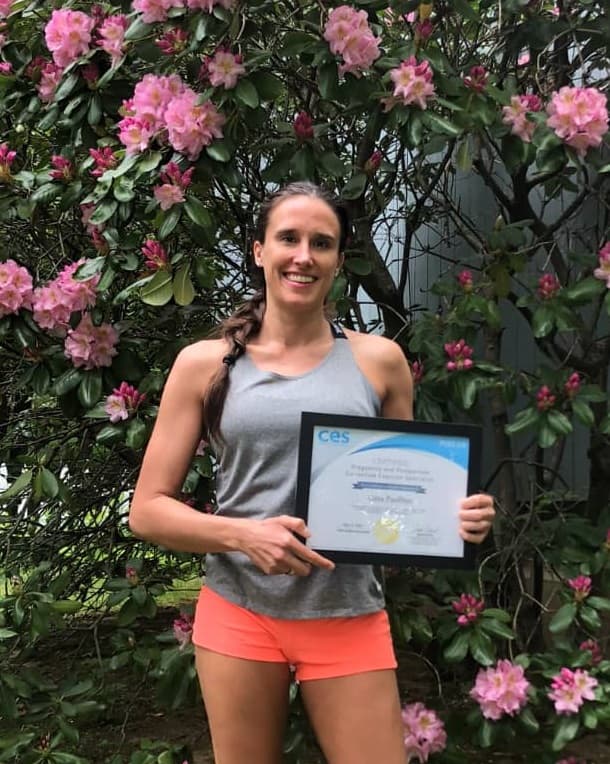 Rehab exercises designed to help prevent leaking are shockingly effective when delivered by a qualified specialist such as myself!

I offer Postpartum Corrective Exercise services via video call as well as with in person sessions in select locations. Find out more!

Leaking Pee After Giving Birth: It's Not Fair!

It's also super common for women to feel resentful if they develop leaking pee after giving birth - particularly if their bestie or their sister never dealt with this issue. "Why me??" Is the thought that I hear over and over again as a Postpartum Corrective Exercise Specialist.

There are two main solutions to fixing leaking pee after giving birth: surgery and rehab. If you get surgery, know that rehab is likely to be part of your healing process, too! I like to recommend rehab first because it's much less invasive, oftentimes is just as effective, and surgery can be there down the line if the rehab efforts don't work.

As I mentioned before, many women require rehab work even after having a surgery, so why not start with the rehab? Furthermore, many individuals choose to have surgery only to find that the surgery didn't take because their faulty mechanics (which almost all of us have when we don't know what we don't know!) end up resulting in too much pressure down, limiting the effectiveness of the surgery.

The Importance of Mindset when Approching Rehab

I think a lot of us fall into a trap of feeling resentful that we have to do all this work to fix something (such prolapse) that isn't our fault. Either it's bad genetics, a professional's bad advice during pregnancy or birth failed us, we didn't know we were doing things "wrong" or it was just simple bad luck.

A while back I read Mark Manson's book The Subtle Art of Not Giving a F%#$ and recently on a podcast I was reminded of a distinction Mark made. He said, just because something isn't our fault doesn't mean it's not our responsibility.

It might help to look at an example. If have found yourself in a car accident due to being hit by a reckless driver, it's not your fault that it happened. However, it's your responsibility to get your car fixed.

Rehab can be thought of the same way. It's not your fault that you have prolapse or diastasis!! But it is your responsibility to work on it or get it fixed if you want to live your best life. Yes, sometimes surgery is the best option! But even then, our movement patterns will likely dictate how well the surgery goes and/or how extensive the surgery has to be in many cases. Everyone can stand to improve their movement.

Are you spending mental energy resenting a problem that isn't your fault? I know I have spent a lot of mental energy on this in the past - and it simply got me nowhere fast.

I know a lot of people who resent the work they have to do (either in rehab, or workouts, or even life in general) so much that they don't do anything at all. That is a choice that is your right to make, but it also leads to greater suffering when things don't go the way you want. If you are here in this group, there is at least a small part of you that wants to make the choice to really work on your situation.

Even if it's not your fault, it's still your responsibility. To me, this statement makes me feel less cheated by my circumstances and history, and more empowered to do the work. Does this statement resonate with you?

Leaking pee is a barrier to exercise for many women. In a cross-sectional study of U.S. women, 28% of those that report urge incontinence (a sudden urge to urinate) find it to be at least a moderate barrier to exercise. Of women with urinary incontinence, 11.6% did not exercise because of it, 11.3% exercises less than they would have liked, 12.4% changed the type of exercise they did, and 5% stopped exercising in a gym altogether. For women with severe urinary incontinence, about one-third did not exercise or exercised less because of it.2

I have helped countless women stop leaking pee after giving birth - and I am confident I can help you do the same!

If you're interested in my services, we start out with a consultation where I can assess where your body is at and your symptoms are at to see what needs to happen to get you symptom-free. During the very first visit I will begin teaching you exercises and strategies to help.

You can fill out the form below for a Price Quote, or you can schedule a Free 15 Minute Discovery Call on My Calendar if you'd like to chat first. You will be able to choose between an audio call and a Zoom.

Whatever you do, do NOT settle for the notion that leaking pee after giving birth is the way it will always be! I've never met a woman I couldn't help.