The Most Effective Cardio Possible

The Most Effective Cardio Possible You Can Do For Fat Loss is Interval Training.

Want to know the absolutle most effective cardio possible? Well, you're in the right place!

Interval training is the most effective cardio because it burns the most fat and calories in the least amount of time compared to all other cardio exercise. Since "lack of time" is the number one reason people give for not working out, this makes interval training a very useful method for most people. 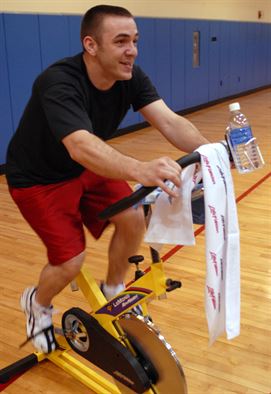 Interval training is by far the most effective cardio out there.

However, even if lack of time isn't a problem, the average trainee is better off doing interval training than doing general cardio. Interval training is more metabolically taxing for the body, which means a greater calorie burn and a more effective workout. This extra calorie burn is most pronounced during the other 23 hours of the day that you are not exercising--which is a lot of time, compared to the measly half-hour or hour that you are exercising. This extra calorie burn comes during the process of the muscles recovering and repairing themselves after a strenuous exercise session, and is a big reason why interval training is the most effective cardio you can do.

Although the term "interval training" is used to describe many exercise protocols during which the intensity is varied rather than steady during the workout, to do the most effective cardio you must specifically perform the type of interval training that uses all-out-effort "sprints" typically of 60 seconds or less in duration, sandwiched between very easy-pace "recovery" cardio. For example, the fastest 100-yard dash you can do alternated with 1 minute of walking would constitute the most effective type of interval training.

The researchers, Trapp & Boutcher put a group of women through a 15-week study where one group was a control, one group did intervals (20 minutes of alternating sprints and recovery), and one group did 40 minutes of steady cardio.

The funny thing is, the interval workout lasted only half as long as the steady state cardio workout, but on average was six times as effective for fat loss. The total calories burned during the workout was about the same in both groups, but the major difference occured in the calories burned the rest of the day in the interval group. This large post-exercise calorie burn simply didn't happen in the steady cardio group because there wasn't a huge metabolic demand to recover from.

The take-home message is this: don't get hung up on how many calories are burned during a training session with aerobic training, or how long your aerobic training is. That is not nearly as important as how many total calories your body burns over the course of the day--and you will burn many more with interval training. I have some clients who perform cardio for just ten minutes per day, three days per week and get better fat loss results than clients who work out for sixty mintues of cardio five or six days per week! Of course, the intensity of the sprints is very important, but it is something you can work up to, increasing your effort over time so that you can get these fabulous results in so little time it will blow your mind!