Fitness Saves the Day in Utah

When fitness saves the day for you, you'll be extra glad you work out!

See this car? This isn't my rental car, but it is the closest picture I could find online of what my rental car looked like at one point during a hiking trip in the deserts of Utah last week. During the incident, I was too scared and shocked to take a picture of my own. 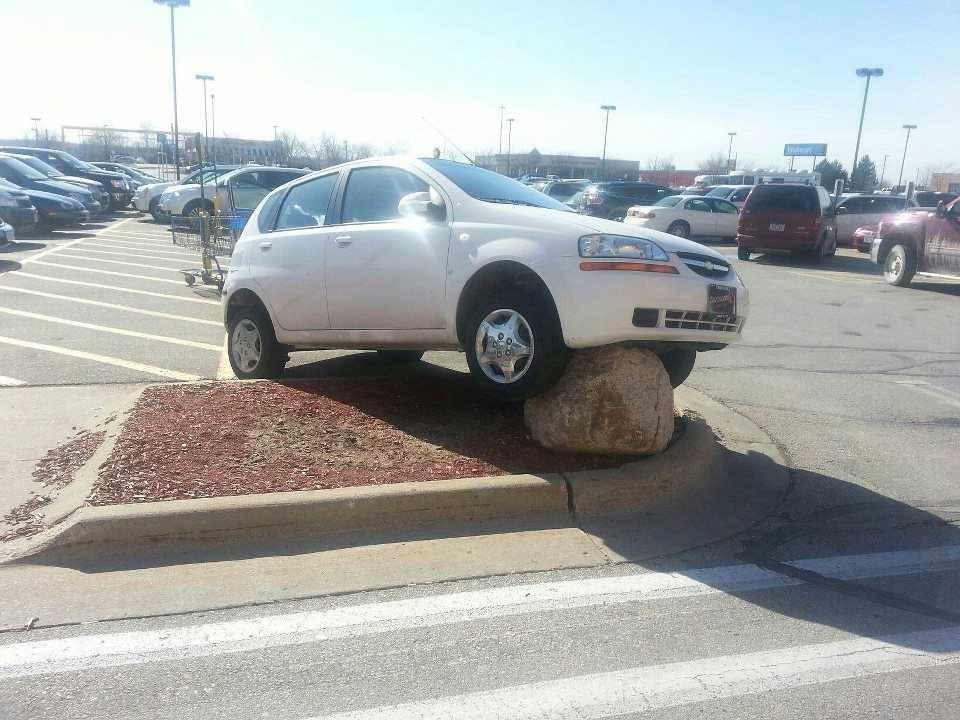 My husband was driving and wanted to pull over on the side of the road to sightsee. There was a boulder in a small gulley that was obscured by dust and glare. He drove into it and ended up with the front wheels elevated in the air. Our car was front wheel drive, a Nissan Versa. When it happened of course I panicked. We were hundreds of miles from the rental car place and a good 50 miles from even having cell coverage. We were driving through a desolate national park and it was over 95 degrees. We had some water but not enough for a worst case scenario. There were very few people we had even seen that day, and no one was passing by.

First my husband (good thing he is strong, too!) thought to find some other boulders to place under the wheels. He dug some out of the ground and got them under the wheels. That still wasn't enough to gain traction so I came up with the idea to wedge some smaller rocks behind the wheels. Now the front tires at least had something to grip on. These boulders he moved were over 100 lb. apiece! Then, an older couple (in their 70s) noticed us and pulled over. That was relieving until we realized they didn't have much to offer us, either. They agreed to help push, so my husband took the wheel and I joined the other two to push. We pushed and pushed and no luck. I was holding back just a bit not wanting to get hurt. But I also didn't want to sit on the side of the road in the heat waiting for a tow or whatever we hopefully would have been able to get to help us out.

I coached myself in my head as we were pushing and told myself to push the hardest I had ever pushed in my life, we tried one more time...and the car rolled off the boulders!!! We had no damage to the car!! We were only four days into our trip and I had been envisioning huge expenses, giant pains in the butt, and much time, effort and disruption to our trip to deal with getting the car off the boulder. And none of that happened! We got to continue on our merry way like nothing had even happened. We were most certainly very, very lucky, too.

I was so greatful in that moment that my body was strong enough and healed enough to do this task! And the best part is, I didn't get sore or hurt in any way from my effort.

Yay for being strong and capable! You never know when you might need to use it. And I think next time we might spring for the 4 wheel drive The whole rest of the trip, whenever something didn't go exactly right we would joke, "As least we are not on a rock!"